The 2018 vintage. It was a long summer…
There was little indication of what was to come at the turn of the year. The winter period was predictable, alternating between rain and snow, and falling into the minus degrees by the end of February. The middle of March brought the unannounced coming of Spring which after only a few days retreated into winter delaying the budding period. Come April the weather took yet another change in direction. The clouds disappeared and the sun showed itself with an unusual force that time of the year. Indeed, April 2018 turned out to be the second hottest in the 251-year history of meteorological reporting, resulting in the vines blossoming a full three weeks earlier than usual.

May and June continued like April, warm and from time to time very hot. High precipitation and low temperatures gave pause for concern in July, however it was welcome relief given the lack of rainfall in the preceding months. This cooler interlude turned out to be short lived, as one week later the temperature was again stable at above 30 °C. And there it stayed.

Due to high temperatures in late July the growing process slowed down, yet there was never any indication of drought stress and the vines dealt with the extreme heat well. Thanks to our ten-year organic work in the vineyard the soil remained healthy, balanced, and provided the vines with ample nutrients. 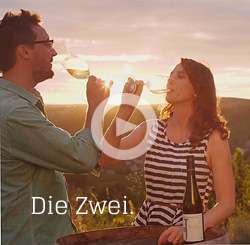